This tutorial will take you through deploying and testing your smart contract on a local, private blockchain you created using Geth.

Why would we want to publish a smart contract to a private, local chain? Mostly for testing purposes. This is how we can test contracts locally without publishing it on a larger network for everyone to see. And, it’s free to do, since we can allocate as much ether as we want to accounts we own through our genesis state file.

Solidity is a contract-oriented, high-level language for implementing smart contracts. Here is how you can install it.

This entire tutorial is based on your successful completion of #2.

We will be using the Greeter.sol contract from ethereum.org. It sends you a message, and you can change that message if you’re the contract owner.

Once you have that in a Greeter.sol file, do the following from a Terminal window:

As explained in ethereum.org, this generates a target directory containing:

If you notice in the contract code for greeter contract, we see “contract greeter is mortal {”

This means that the greeter contract inherits all the functions and variables from the mortal contract, so the resulting Greeter.abi and Greeter.bin contain all the code we need. You might as well discard Mortal.abi and Mortal.bin, since their data are already contained in the Greeter files.

The Greeter.bin file contains the compiled Greeter contract. If, from Terminal, you do cat Greeter.bin, you will see a bunch of hexadecimal values. This file’s contents are what get placed on the Ethereum blockchain. All the executable code needed for the Ethereum Virtual Machine to interpret exists in this file.

ABI stands for Applicaiton Binary Interface. It’s a way to interact with the hexadecimal output from the Greeter.bin (which will be the binary data stored on the blockchain) in a human-readable way.

If you do cat Greeter.abi from Terminal, you’ll see something human-readable, since by convention Ethereum clients and compilers use JSON to represent the data.

The ABI produced for the contract needs to have all the relevant details about each function, variable, and their attributes. If there is a mismatch in what the ABI says about a function or variable with what the compiled contract code says (for example, your ABI says a function accepts a string as an argument, but the compiled code expects an uint), then that interaction you do with the published contract through the ABI will fail.

The compiled contract code is the truth. The ABI is an abstraction to make interacting with it easier.

Writing contract to your private chain

Make sure you have set up a private Ethereum blockchain using Geth. The following steps all take place from the console running from Node 1 in that post.

Since the data in Greeter.bin is encoded in hexadecimal, we must manually add “0x” to the beginning of the variable we create to tell the EVM that we are providing it hexadecimal. Copy and paste the contents of Greeter.bin into a new greeterHex variable like so:

You can test that the variable stored the contract data properly by entering greeterHex into the console again.

The bytecode we just stored in a variable is the code that will actually live on the blockchain. It’s also how all commands we send to the contract will get interpreted. Because we’re humans, not robots, we use the ABI to make our lives easier. Specifically, without an ABI, we would have to interact with the smart contract’s functions by knowing the hexadecimal encoding of those functions and what they mean.

Let’s store the contents of greeter.abi in a variable like so (truncated output):

If formatted properly, Geth will interpret the data you provided it as JSON, and present it back to you: 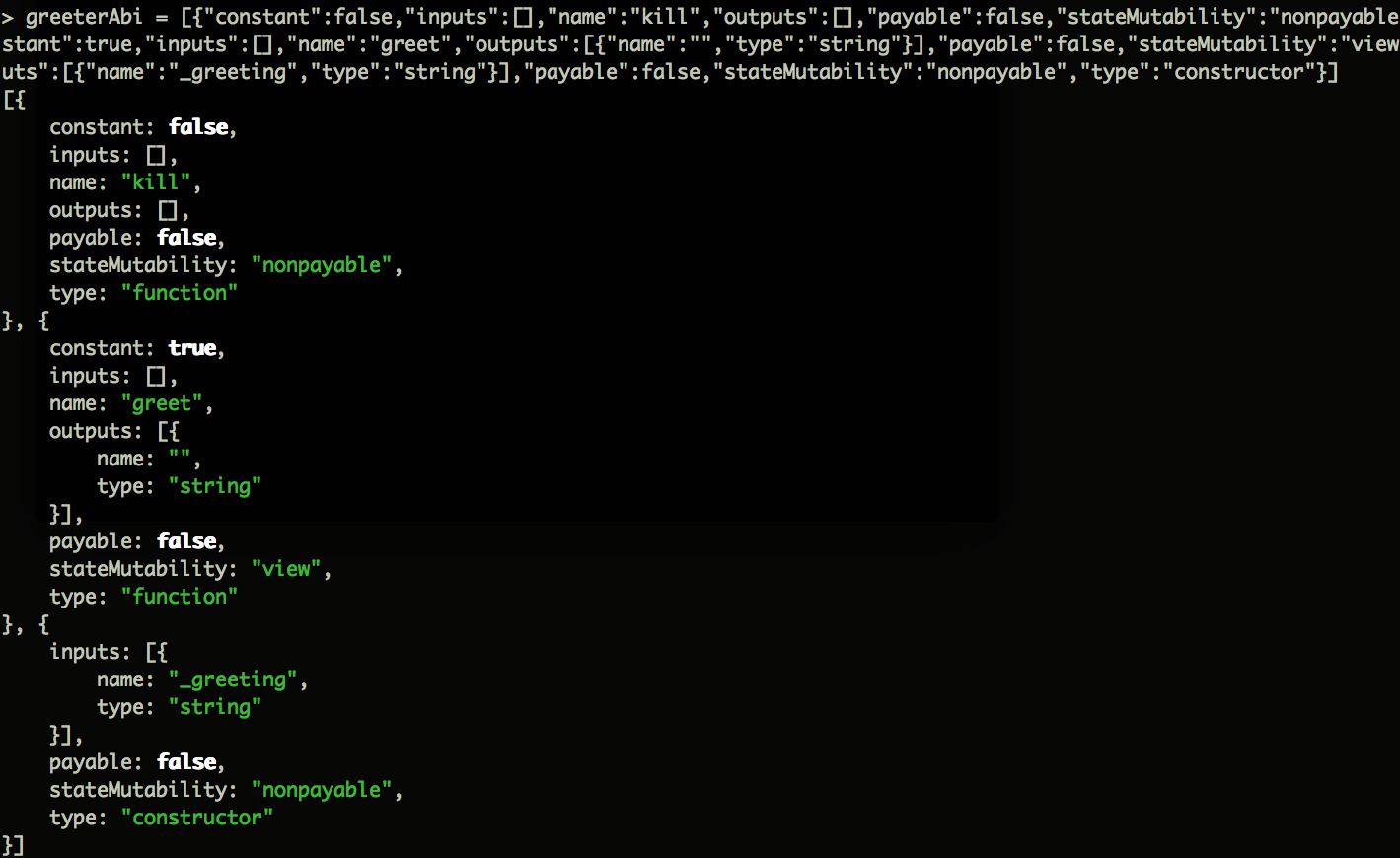 Right now, Geth only knows that the data you provided it was properly-formatted JSON. It does not know to treat it as an ABI for a contract you will be publishing shortly.

To make Geth aware that the JSON in our variable is to be trated as an ABI, we do the following:

What eth.contract() does is treat the JSON passed into it as an ABI for a contract. This means that if we now did greeterInterface.greet() (after having published the contract to the blockchain), Geth would know that greeterInterface is a means of creating the corresponding bytecode needed for calling the greet() function on the contract.

Now that we have our variables defined, it’s time to publish our contract to our local blockchain.

Here is the command to publish the contract, slightly modified from what we see in Geth’s contract tutorial. Further documentation can be found here.

If you get an error during this step about needing to unlock your account, do personal.unlockAccount(eth.accounts[0]) and enter your passphrase.

Once you have completed this step, you should get something like this:

The fullhash value above is the transaction hash, or how we can track our transaction on everyone’s nodes. Using something like Etherscan and feeding it this hash value will allow you to see the status of your transaction.

We can store this transaction hash in a variable without having to copy and paste by doing the following from Node 1:

As I mentioned, this transaction also exists on Node 2 (since we published it), but does not yet exist on either Node’s blockchain. It is in the transaction pool for both.

Run the following from either Node to see the “pending” transaction:

You will see 1 “pending” transaction in both Nodes’ pools. For a more detailed view, enter txpool by itself.

If we wanted to see a transaction receipt, it would not exist yet:

A transaction receipt gets created once the transaction has actually been mined into a valid block and accepted by the network.

Now, our contract should be published. Try the same eth.getTransactionReceipt(greeterTxHash) command again, and you will get a receipt.

As a reminder, the address of the published contract will be the same as the address Geth gave us when we created the contract in the first place. Another way to recover this address is by running the following command from Node 1:

Now, we use the interface we created earlier from the ABI and link it with the published contract:

To see it working on Node 2, you’ll need the published contract’s address and its ABI. In one swoop, you can do it all like so:

Again, the ABI can be linked to any contract on your local node, but the resulting bytecode you send to that contract on the blockchain will be malformed and thus rejected unless you actually have the correct ABI for the contract with which you want to interact.